Panoramic views in Flight Simulator by multiple monitors on a LAN 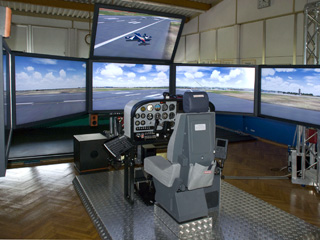 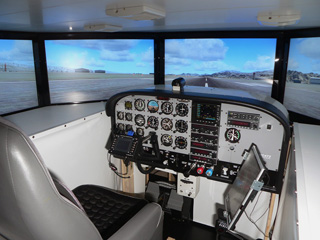 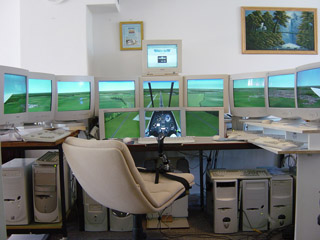 January 18th, 2021 - Widetraffic 2021 v.1.1 available: Widetraffic 1.1 for MSFS (Microsoft Flight Simulator) is available. It now supports also the synchronization of airport vehicles. Please be sure to read important information about how it works (the user's guide can be instead found in the same folder where the application is installed into). Go to downloads.

WidevieW is a Flight Simulator add-on that can be used to create virtual cockpit with panoramic scenery view, up to 360°, using multiple monitors on networked (LAN) computer. There is no limit on how many PCs can be linked together, and each of them can be configured to show scenery, maps, Spot Plane or Tower view. View angles and zoom factors can be easily customized, to get images merging perfectly between the monitors or video projectors.

Widetraffic is an optional module for WidevieW which ensures AI and multiplayer traffic synchronization throughout the local area network (LAN), so the same airplanes fly at the same time and place on every computer. Since version 1.2, Widetraffic synchronizes also the airport vehicles and, thanks to a distrubuted client and server processing, improves the performance of Flight Simulator when lot of AI Aircrafts are displayed.

Get rid now of the limitations of multiple monitors connected on the same computer and use your LAN to expand your cockpit until space and budget allows! Compatible with Microsoft Flight Simulator 2020, Flight Simulator X, FSX Steam Edition, Prepar3D (both 32 and 64bit releases), Microsoft ESP and FS2004.

What is the best way to use multiple monitors with Flight Simulator?

Why use Flight Simulator on multiple computers in a LAN, when any modern video card supports multiple monitors on the same computer, is one of the most frequently asked question. This can be easily explained with a single picture that summarizes all:

Built by users, using WidevieW to get a panoramic scenery view through multiple monitors on a LAN. More WidevieW pictures here.